Ravonne Byrd’s school and work are both in Corvallis, although her home is much closer to Albany — not the one just up the road, but that other Albany — about 3,000 miles away, in New York.

A student in the popular postbaccalaureate computer science online degree program offered through Oregon State Ecampus, Byrd also telecommutes to her job with the College of Engineering’s Center for Applied Systems and Software.

She was almost 30, with a bachelor’s degree in religious studies from Princeton University, when she decided to change course. After college, she had worked with migrant farm laborers and survivors of domestic abuse. But, she came to realize, she wasn’t cut out for that kind of work.

Then she recalled how she had enjoyed writing code for a statistics assignment in college, so she decided to attend a local web development boot camp. She knew the transition to technology would be difficult, but she couldn’t envision how she would navigate to a new job. In the midst of it all, she got married and became pregnant. Self-doubt set in. Was it too late for someone like her to start a career in technology? She was breaking the stereotype of the “tech bro” — young, male, and white. Friends from college had already parlayed their computer science degrees into lucrative jobs at Google and Twitter.

“Did my time pass? I had a child. There was a lot of uncertainty, and I did a lot of crying,” she said.
Ravonne Byrd is working toward a postbaccalaureate degree in computer science.

While the boot camp didn’t lead to a job, Byrd persisted, studying on her own — at times cradling a nursing child in one arm and a software manual in the other. She checked into academic programs closer to home, but they required either in-person attendance (meaning costly childcare) or an undergraduate computer science degree. Even with the full support of her husband, neither option would work for her.

An online search led her to Oregon State’s postbacc online degree program, which turned out to be the perfect fit. In addition to learning a full suite of skills, she’d be joining a large community of students, many with circumstances similar to her own.

Last spring, Byrd applied for a job with the Center for Applied Systems and Software. In opening up the position to Ecampus students, the search committee had taken location off the table, said Carrie Hertel, director of the software development group and test lab at CASS.

“When we hired Ravonne, she shined just like any other student we’d be interviewing,” Hertel said.

Byrd was the first student to work on a fully remote basis. She remembers feeling proud of her preparation during the application process. She was asked about concepts she had studied as she was breastfeeding her son, things like object-oriented programming and relational databases.

“I think persistence is a big part of being a software engineer, because you need to keep going until you find the answers or how you can solve a problem,” Byrd said. “Being able to see that, even when I couldn’t see the outcome, I kept studying when I felt hopeless. It does my heart good now that I know I have that persistence in me.”

Working across time zones was initially a concern, but that has not been a problem. Byrd maintains a close working relationship with her CASS co-workers, Hertel said. And being able to work from home has been a game-changer for Byrd. She has contributed to projects in Oregon for the U.S. Department of Agriculture and the Oregon Department of Transportation.

“The people at CASS are kind, knowledgeable mentors,” Byrd said. “I feel supported as a future engineer and a remote software development intern. It has also been doable for me, to juggle and center my responsibilities as a wife and mother. It’s been energizing to do all of this.”

Buoyed by her own success, Byrd encourages others, particularly new moms, to consider the benefits of a technology career.

“A lot of people think tech is not for them. There are barriers — things to overcome — whether you’re Black or white. People in their 30s and 40s might think they can’t do that,” she said. “That’s not true.

You can make a career switch and have an immediate effect on your children’s future. That’s a powerful thing, as a mother. I’ve definitely cried out of happiness.” 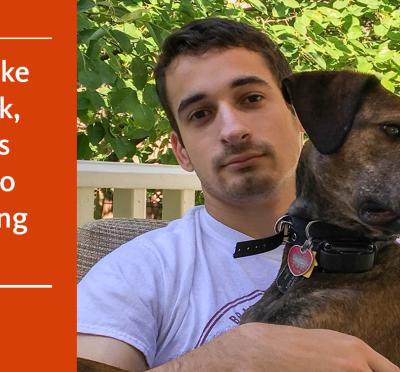